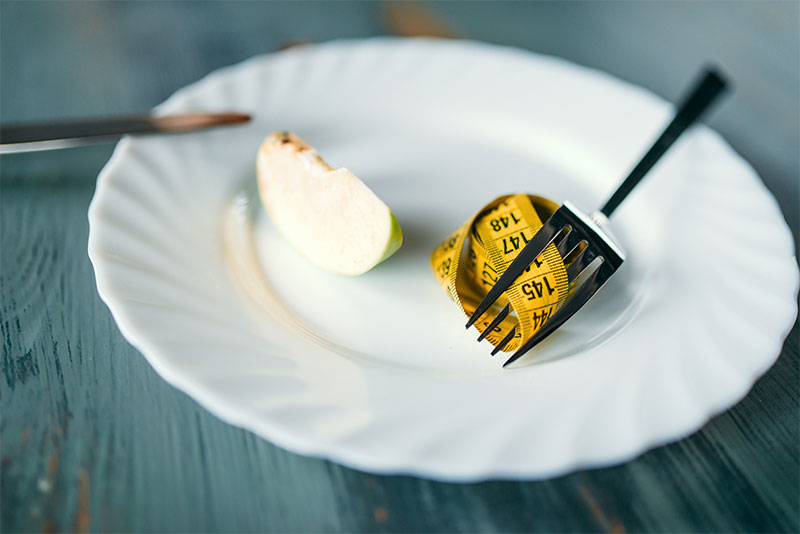 According to the Canadian Paediatric Society, anorexia is the third most common chronic medical condition in adolescence. Although this eating disorder appears more in adolescence, it is also increasingly seen in young children. This disease is characterized by an obsessive quest for thinness and causes severe dietary restriction.

Anorexia often occurs in adolescence, a critical period when the young person seeks his identity and begins to develop a growing concern for his body image.  According to data from the Quebec High School Health Survey in 2010-2011, one in two high school students is dissatisfied with their body.

What are the first signs?

A radical change in eating habits demonstrated by an increase in dietary restriction and accompanied by excessive concern about one’s weight could be a sign to sound the alarm. The young person will often avoid eating foods that he deems caloric and likely to make him fat, or even eliminate a food group completely (such as starchy).  It can also isolate itself more often to eat and may find several excuses to avoid eating with the rest of the family. You may notice that he often says “I just had a snack,” “I’m not really hungry” or “I’ll eat later.”

Hyperactivity can be another alarming sign, such as the requirement for your child to exercise whenever he or she allows himself or herself to eat. Exercise can also be done in secret; for example by doing training in the room so as not to arouse suspicion in other family members.

You will also notice more comments from the child about their weight; like “I think I’m fat” or “my friends are skinnier than me.” In anorexic children, there is often a distortion in body image. The child has a belief that he or she is too high a weight when the weight is normal or even in some cases below the norm.

From the first signs of anorexia in your child, you can address your concerns with them without making judgments. Although it is highly likely that the young person is in denial of the eating disorder at first, a medical consultation may be necessary to assess his or her health. Psychological and nutritional monitoring may also be effective for the treatment of the disease. Please contact us if you would like more information about our services specializing in eating disorders.

Starting a diet after self-isolation… Good or bad idea?

How to reduce food waste among consumers
Scroll to top